The Daily Caller points to the irregularity of the Biden calls for resignation of Trump appointees to the boards of military academies.

“So the White House asked for several members of these military academy advisory boards to resign or they would be removed. Many have refused to resign. So what happens to them now?” Berman asked.

“Well, we’re confident in our legal abilities here, but I will tell you, John, no one is looking to have a battle here,” Psaki replied, saying that Biden had every right, as president, to appoint or remove anyone as he saw fit.

“We’re confident in our right to make new decisions about who serves on these boards,” Psaki continued, arguing that the president had the right to choose people he felt were better aligned with the viewpoints of his administration.

“Traditionally these appointees do serve out their full three-year term, though,” Berman pushed back, asking why Biden had not made any effort to make a distinction between appointees who were career military people and those who were political operatives who had worked for Trump.

(Read more at the Daily Caller for Psaki’s biggest lie)

While I will agree with Psaki that the President has a right to appoint or dismiss anyone who is appointed to serve within the executive branch, there may be traditions of allowing terms to be served. Therefore, when the next Republican or conservative President comes in and clears house, I don’t want to hear complaints from Democrats now that they have set a new precedent.

With that said, I feel obligated to respond to the liar’s snark in that — for there to be an insurrection — there will have to be more than what occurred in the District of Columbia on 6 January 2021.  Breaking of windows and milling about a Capitol building does not (in my mind) constitute insurrection.

If, however, Psaki wants to call the actions of Antifa and Black Lives Matter in Portland or any of the other cities where they burned down businesses, looted, and rioted as insurrection — that would fit my definition. In fact, if she wanted to call call the instance where Antifa attempted to burn down an occupied Portland federal courthouse — that would fit my definition of insurrection to a Tee. However, then we would not be talking about condemning Republicans, would we?

Breaking from “presidential norms,” Biden demands of Trump’s military board appointees resign or be fired

Legal Insurrection puts the magnifying glass on the Biden decision to call for the resignation of Trump appointees to the boards of military boards.

The Biden administration has asked 12 officials appointed to military service academy advisory boards by former President Donald Trump to resign or be dismissed.

White House press secretary Jen Psaki on Wednesday afternoon confirmed the request had been made.

Psaki added: “I will let others evaluate whether they think Kellyanne Conway and Sean Spicer and others were qualified, or not political, to serve on these boards, but the President’s qualification requirements are not your party registration, they are whether you’re qualified to serve and whether you’re aligned with the values of this administration.”

This move breaks from the tradition of appointees from previous administrations being allowed to serve all three years of their appointments to the military service academies.

The boards of the Military Academy at West Point, Naval Academy in Annapolis and Air Force Academy in Colorado Springs are made up of a mix of lawmakers and presidential appointees who traditionally meet several times a year to provide non-binding advice on issues like curriculum, student morale and institution needs.

Non-lawmaker members typically serve three-year terms, even across presidential administrations. Several members appointed by President Barack Obama at the end of his term served several years into the Trump administration, including Sue Fulton, President Joe Biden’s nominee for Assistant Secretary for Manpower and Reserve Affairs at the Pentagon, who served on the West Point panel.

While I agree that a legally-appointed President would have the authority, this guy should be another case

Because of the cloud of uncertainty provided by the numerous voting irregularities in Maricopa County, Arizona and in Michigan, Wisconsin, Virginia, and Georgia, patriots need to apply a new standard of scrutiny to Joe Biden and Kamala Harris.

Since the House has three times demonstrated that impeachment does not require high crimes or misdemeanors (only a political vote), then Republicans and conservatives need to wield this tool against Democrats and liberals with impunity. Did that VP blow his or her nose on a napkin rather than a handkerchief? Impeach that VP. Did the President seem to offer government monies to a foreign leader if that foreign leader would lie for him? Impeach him.

As participants in the political realm, conservatives will need to learn to alternately employ and avoid the following strategies used since the 1960’s by the Left:

Of course, as conservatives, we would not implement all of these rules all the time. Pick one (like #4 — “Make the enemy live up to it’s own book of rules” as with tweeting the last article in this post to Democrat representatives) and use it.

Fox News reports on a tweet that seems to have caused a stir in Washington, D.C.

Ronald Klain, the White House chief of staff, faced criticism on social media Thursday after he retweeted a post that seemed to praise the Biden administration for pulling off the “ultimate work-around” for a national COVID-19 vaccine requirement.

President Biden announced proposed rules that would force private-sector employers with more than 100 workers to either require them to be fully vaccinated or mandate that they undergo weekly tests. Biden referred to the mandate as a “new action plan.” The rules would be enforced by the Occupational Safety and Health Administration (OSHA).

Businesses that do not comply would face fines up to $14,000 per offense, an administration official told The Associated Press. The mandate is expected to affect as many as 100 million Americans.

Klain retweeted MSNBC’s Stephanie Ruhle, who posted, “OSHA doing this vaxx mandate as an emergency workplace safety rule is the ultimate work-around for the Federal govt to require vaccinations.”

The New York Times pointed out that OSHA is tasked with overseeing workplace safety and has the authority to “quickly issue a rule, known as an emergency temporary standard, if it can show that workers are exposed to a grave danger and that the rule is necessary to address that danger. The rule must also be feasible for employers to enforce.”

Sen. Ted Cruz, R-Texas, a critic of Biden’s announcement, retweeted a post warning Klain that courts consider intention when hearing cases, and the retweet could prove to be problematic during future challenges.

The senator was referring to the Supreme Court’s ruling last month that blocked the Biden administration from continuing a temporary eviction ban in place due to the coronavirus. The court said that the Centers for Disease Control and Prevention (CDC) lacked the authority to reimpose the moratorium earlier that month without congressional approval.

Biden has been told by the Supreme Court that his border policies at the Southern border defy the Constitution. Still, he continues breaking the law as interpreted by this Supreme Court.

Now, as shown by the tweet above, the Biden regime wants to ignore the Constitution and dictate healthcare.

Outside of murdering a baby inside of the womb, Democrats don’t believe in “pro-choice” when it comes to: 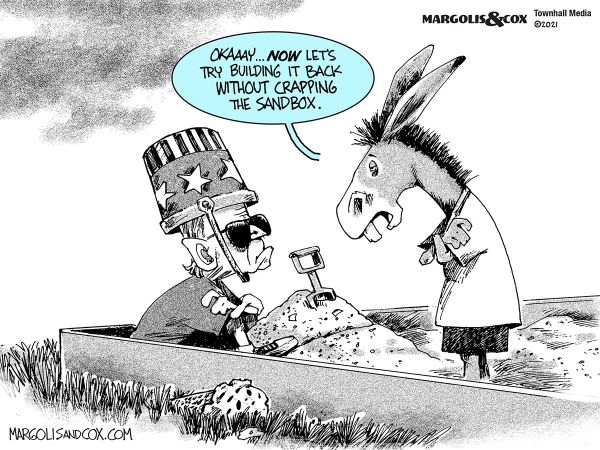 If Biden really had a “buck stops here” sign …

4 thoughts on “Biden runs afoul of tradition on military academies, ruffles feathers with a COVID mandate, and continues to show himself a buffoonish clown”