The Epoch Times provides us with the words of a 9-year-old girl who stood up against adults who changed the rules mid-stream.

A 9-year-old girl from Minnesota has gone viral online after confronting her local school board, which she said had contradicted its own “no politics” policy by displaying a Black Lives Matter (BLM) poster in a classroom.

The girl, who only identified herself as “Novalee,” is a student at an elementary school in Lakeview Area Schools, which serves the Dakota and Scott Counties in the southern suburbs of Minneapolis. She gained popularity on social media because of a video in which she called on the school district to remove the BLM posters.

Speaking at a June 8 board meeting, the student said she saw posters of BLM and Amanda Gorman on her teacher’s wall at the school. “I was so mad. I was told two weeks ago at this very meeting spot: no politics in school,” she told the board members. “I believed what you said at this meeting.”

The student said she asked her principal to take down the posters, citing a school board policy prohibiting displays of political messages including Black Lives Matter. The principal allegedly refused to remove the posters, and told her that the school board members were the ones who made them.

“I was stunned. When I was here two weeks ago you told us to report any BLM in our schools,” she recalled. “Apparently you know they are in our schools because you made the signs.”

“Doesn’t matter what color you make the posters and the fonts you use, we all understand the meaning. It is a political message about getting rid of police officers, rioting, burning buildings down while king Governor [Tim] Waltz just sits on his throne and watches,” the girl added. “Changing the colors or the fonts of posters does not change the meaning. I am nine years old and I know that. You expect me to believe that you did not know what you were doing by making these posters? Come on people!”

She then clarified that she judges people by the way they treat her rather than their race, but the school board appeared to be encouraging people to focus on the color of their skin.

“You have lied to me and I am very disappointed in all of you. You cannot even follow your own rules,” the girl concluded. “Get the posters out of our schools. Courage is contagious so be courageous.”

(Read more of her response at The Epoch Times)

If there are two things third-graders understand, those things would be fairness and a sense of keeping promises.

Having taught third-grade boys’ Sunday School for years, I can tell you that third graders have a keen sense of fairness and a strong memory of things promised. This video clip bears this out.

Therefore, you can expect that any instance of this happening across our nation at least has caused kids to think. So, this forcing of liberal ideology via posters and the like may cause the birth of a new generation of conservatives.

The Western Journal reports on a high-school boy who stood against the tenets of critical race theory.

You probably haven’t heard of Brad Taylor before. My guess is that this might not be the last time you hear his name.

The 15-year-old Taylor is — or rather, was — a student at Rosemount High School in Rosemount, Minnesota. He’s decided to leave the district, telling the Minnesota-centric conservative news outlet Alpha News that “it wasn’t a healthy environment for any student to be in” due to the encroachment of critical race theory.

However, before he left, he decided to give the school board in Minnesota Independent School District 196 a piece of his mind. It’s now going viral after being posted to YouTube by the Daily Caller, with over 500,000 views as of Tuesday morning. That’s more than 125,000 per day since it was posted Friday.

In the speech, Taylor criticized the school for promoting a “leftist agenda in class” and said the district’s “schools are quickly becoming a place where promoting activism is actually more important than promoting education.”

Taylor began by going back to the fall, his first day of his freshman year at Rosemount High School, and recounting how “the principal came out and gave us a heartfelt speech about equality and standing together.”

The principal, he said, listed various races while “expressing how much they matter and how important they are.”

“But never once did he mention an identity that reflects me or half the kids that were in the class.”

There was a bit of what the kids might like to characterize as a “sick burn” next — with Taylor noting to the board members, “I know you haven’t been to school in a while and I know most of you don’t have any kids left in the school district.” Apparently, those who make the rules in District 196 don’t necessarily have any skin in the game and, one might guess, are more motivated by political than parental concerns.

“You must admit how uncomfortable it will be to be characterized just by your skin color on the first day of school and be thought that you were wrong just because of your skin color,” Taylor continued. “I’ll never forget the look one of my friends gave me from across the room as we were sitting there listening to this blatant bias being expressed in the so-called equity statement by the leader of our school.

“To be clear, I don’t need you to tell me that I matter, but hearing the condolences given to other races and leaving just one race out, inevitably you’ll start to feel like you’ve done something wrong,” he added. “In our principal’s attempt to unify us, he instead created unwarranted boundaries and barriers between his students, pitting us against each other based on characteristics that we can’t control.”

In his speech, Taylor told the board he didn’t just hear from other students who felt pressured to conform to a certain viewpoint in order to secure a good grade. He said he was also approached by teachers who told him they agreed with his views but couldn’t express that because they feared retaliation from the district.

(Read more, including where this young man went, at the Western Journal)

Here, a high-school freshman discerns the divisions created by Marxism.

As illustrated by Mr. Taylor, even the young and uninitiated can see that Marxism divides (rather than unites). Therefore, if we are to stand as a nation, we need to avoid the division of Marxism.

Fox News informs us of a 14-year-old girl’s fight in Loudoun County, Virginia, to protect other girls from the intrusion of boys into the showers and dressing areas.

A 14-year-old in Virginia is speaking out about what she says is a sexist move by Loudoun County Public Schools (LCPS) to allow “boys into girls’ locker rooms.”

The policy followed a previous one, 1040, that committed the county to providing an equitable, safe and inclusive working environment regardless of “sexual orientation, gender identity” and other individual characteristics. The more recent proposed policy – 8350 – states in a draft that “students should be allowed to use the facility that corresponds to their gender identity.”

At Tuesday’s school board meeting, Jolene Grover, who was wearing a shirt that read “Woman is female” argued: “Two years ago, I was told policy 1040 was just an umbrella philosophy and you weren’t going to allow boys into the girls’ locker rooms. But here you are doing just that.”

Grover is an eighth grader whose mom pulled her out of an LCPS school last year after seeing various controversial policies emerging. She is currently homeschooled.

“Everyone knows what a boy is – even you,” she added, looking up at the board members. “Your proposed policies are dangerous and rooted in sexism. When woke kids ask me if I was a lesbian or a trans boy because I cut my hair short, it should tell you these modern identities are superficial.”

In an interview with Fox News Thursday, Grover said she worried that LCPS’ new rule would lead to girls being harassed and assaulted.

During her speech, she claimed that her guidance counselor responded to her concerns about privacy and safety by noting that the bathrooms had stalls. Fox News hasn’t confirmed this and LCPS declined to comment on Grover’s speech.

“Now, boys are reading erotica in the classroom next to girls,” she added during Tuesday’s speech, “and you want to give them access to girls’ locker rooms and you want to force girls to call those boys ‘she.'”

“You do this in the name of inclusivity while ignoring the girls who will pay the price. Your policies choose boys’ wants over girls’ needs.”

Grover’s comments were just one of many related to gender as participants responded to the ongoing controversy surrounding Tanner Cross. Cross was suspended last month after giving a now-viral speech in which he opposed the district’s proposed policies on gender.

He told the school board he wouldn’t “affirm that a biological boy can be a girl and vice versa because it’s against my religion. It’s lying to a child, it’s abuse to a child, and it’s sinning against our God.”

Just days after that speech, Cross was told in a letter not to come on the school’s premises. The letter vaguely stated the school district was investigating “allegations that you engaged in conduct that has had a disruptive impact on the operations” of his school. A judge ordered LCPS on Tuesday to reinstate Cross, arguing it violated his right to free speech.

Cross had referred to draft policy 8040, which required Loudoun staff to use preferred pronouns.

“LCPS staff shall allow gender-expansive or transgender students to use their chosen name and gender pronouns that reflect their gender identity without any substantiating evidence, regardless of the name and gender recorded in the student’s permanent educational record,” it read.

“School staff shall, at the request of a student or parent/legal guardian, when using a name or pronoun to address the student, use the name and pronoun that correspond to their gender identity. The use of gender-neutral pronouns are appropriate. Inadvertent slips in the use of names or pronouns may occur; however, staff or students who intentionally and persistently refuse to respect a student’s gender identity by using the wrong name and gender pronoun are in violation of this policy.”

Others at the meeting suggested LCPS’ policies were righteous pursuits or love and inclusion.

Wearing a rainbow pin and mask, state Sen. Jennifer Boysko told the board: “I want to thank you for your commitment to equality and making sure every child feels loved and valued.” Another remote speaker argued policies like 8040 weren’t new and would make “trans and gender-expansive kids feel a little more welcome.”

Some women and girls, though, have started questioning the cost of such policies.

When it comes to the important topic of privacy, this teen speaks

Although this teen proved to be shy in front of cameras, she showed boldness when confronting the need for personal privacy. It is too bad that adults (who can retreat to the privacy of their homes) wanted to deny her that privacy.

All of the above

Biden failing for a long time

Rules for conservatives versus rules for Sheldon Whitehouse 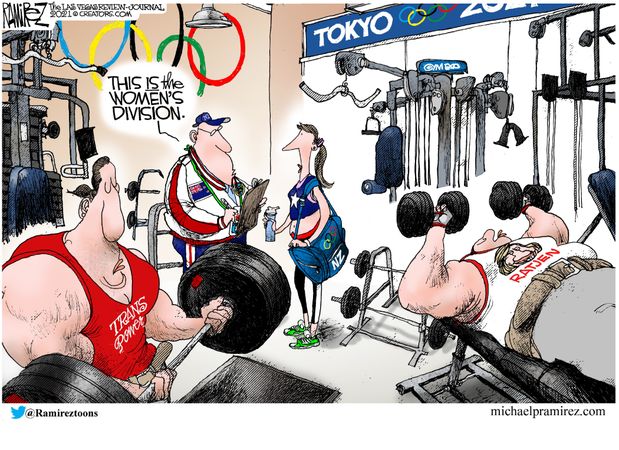 9 thoughts on “From the mouths of babes”