Ogg told union President Joe Gamaldi in a news release to “get with the program” of keeping residents safe. And she called his post, written for a Febuary 2020 issue of the HPOU publication “Badge & Gun,” a “misguided” attempt to get contributions via inflammatory rhetoric and “hate speech.”

“I ask Mr. Gamaldi to work along with us,” Ogg said. “Instead, he is trying to raise money and play election-year politics while being paid for working as a police officer. His efforts to undermine the District Attorney’s office, which is the people’s law firm in criminal court, does not make anyone safer. Evidence-based prosecution is the way to build community trust in law enforcement.”

Gamaldi responded to the press release on Twitter, criticizing Ogg’s supposed definition of hate speech and alleging — as he did in his blog — that she lets violent criminals off with easy sentences.

“According to DA,when pointing out her countless failures, it equals ‘hate speech,’” he tweeted.

He also challenged her to a debate.

“She should be much more concerned about the implosion of her office than what the union president has to say about her failures,” Gamaldi said in a phone call.

In her press statement attacking Gamaldi’s statements about her, Ogg said she considers law enforcement a partner in her fight to make Harris County safer.

The union’s blog post referenced Ogg and her management team as “nothing short of a train wreck.” He titled the article, “Kim Ogg must go! Here are the early stages of our coordinated Plan to defeat the most criminal-happy district attorney in history”.

“They have completely dismantled a once-proud office and contributed to a revolving-door justice system that reduces the safety of our officers, the community, and erodes the faith of the public in our criminal justice system,” he wrote.

The union this month endorsed its legal counsel, Mary Nan Huffman, in the Republican district attorney primary. It endorsed Todd Overstreet, a long-time criminal defense attorney, in the Democratic primary.

(Read more at the Houston Chronicle)

Thanks, Houston Chronicle for defanging Officer Gamaldi’s arguments by not quoting the statistics

Thanks to the Houston Chronicle for not including the tweets that provide the numbers on Kim Ogg’s failure (even going so far as to call it a blog post). Now I remember why I cancelled my subscription in 1996.

Since this a public safety issue, why didn’t you (Houston Chronicle) include Officer Gamaldi’s numbers on how many offenders Kim Ogg and the social justice judges have released to our streets?

To fill the hole left by the Houston Comical Houston Chronicle, I have included interviews, tweets, and tables that explain the facts.

The tweets in this section are the tweets mentioned in the Chris X interview (and the blog post mentioned in the Houston Chronicle article). For all of the tweets, I have included both links to the original Joe Gamaldi tweets and pictures of those tweets (since Twitter has a habit of deleting tweets from conservatives when liberals like Ogg complain).

Because the third tweet is so central, I also took the information of the tweet (a graphic) and split it out into a larger graphic and a table. Hopefully, this will help more people get the information out.

Thread:Property crime in Houston up nearly 7% from 2018-2019, its exploded in 2020 to 15% increase year to date. Cars being broken into to tune of a 30% increase. No one can argue bail reform makes our community safer, statistics do not support it, stop lying to the community 1/4 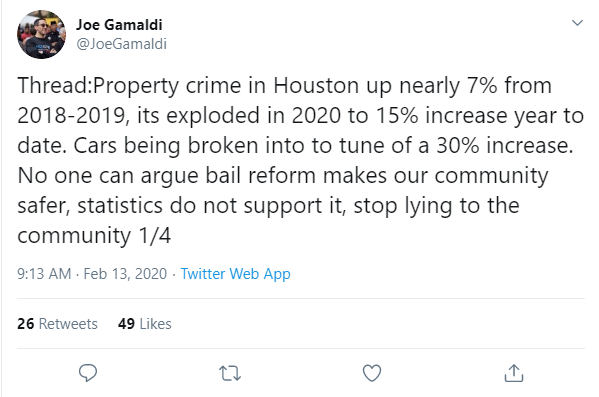 I certainly agree, a single mother should not be sitting in jail waiting for a court date for driving with a license suspended, but stop giving repeat offenders, our true crime drivers,PR bond after PR bond. We have people being caught by our officers who are out on 8-9 bonds 2/4 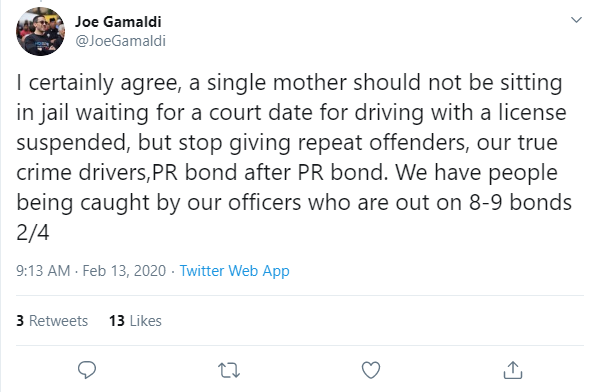 Because the graphic within Joe Gamaldi’s tweet may display a little blurred and because Twitter may delete the tweet, I have both included the graphic from the tweet below and transcribed the numbers of the graphic in a table.

Violent crime is also up in 2020 to the tune of 10% with murders spiking at 35% and robberies 21%. With the DA who is cutting sweetheart deals to violent,repeat offenders,including giving deferred adjudications for types of violent crime, we have a recipe for disaster brewing 3/4 pic.twitter.com/cSFeUjzhxR 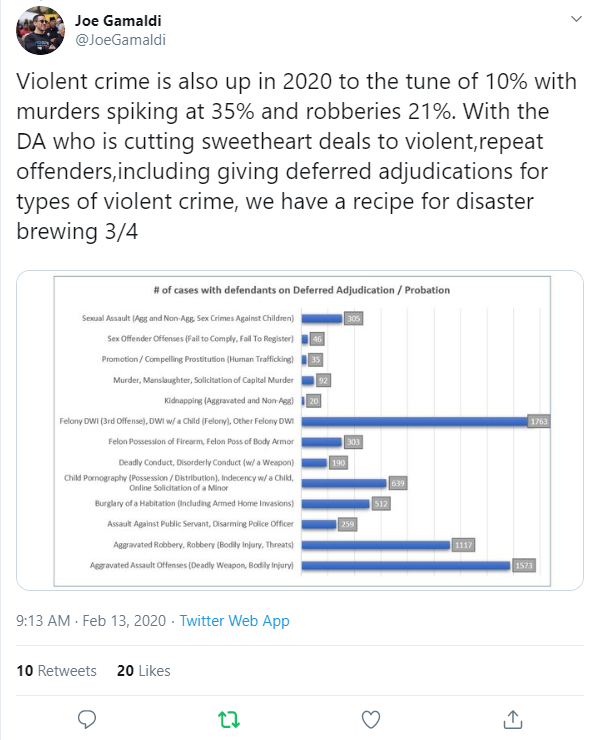 In the event the tweets are deleted and graphics cannot be found, here are the stats

The following table provides the numbers of Mr. Gamaldi’s graphic.

Everyone wants to have an emotional discussion about our criminal justice system, but we need to look at the facts.The facts say that "reform" is failing in the City of Houston and making our community less safe. Many will accuse me of "fear-mongering" but the facts don't lie!4/4 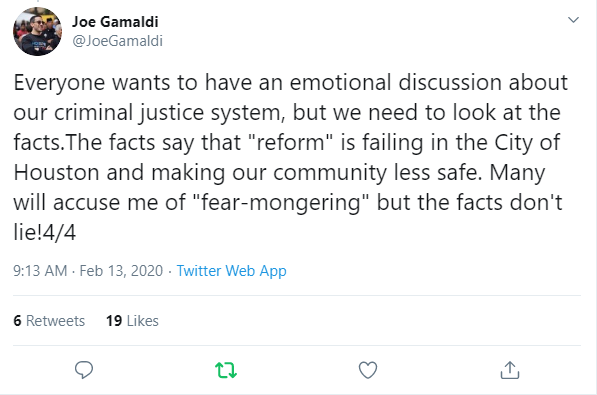 Sooo yesterday @kimoggforda put out a statement that I "needed to get w/the program of keeping residents safe" I immediately invited her to a public debate to highlight this exact issue. Of course,I have heard nothing back,zip,zilch,nada

Lets get it done, @keribla can moderate! 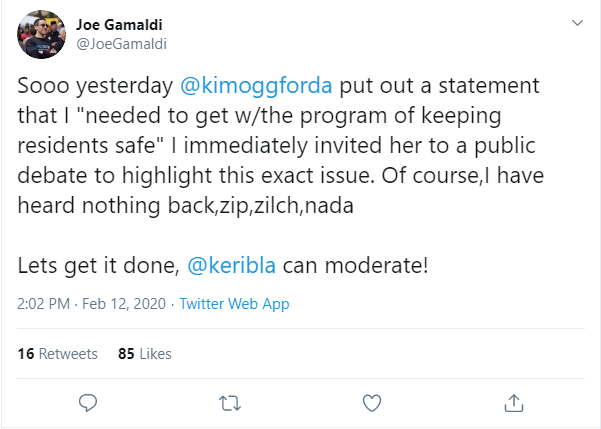 She's definitely not concerned about the residents safety!!!! Not the way they are allowing all of these criminals to easily post bond, walk out of court and commit the same crimes over again🤦🏾‍♀️

#RelationalPolicing doesn’t put a priority on property crimes. The victims would disagree, but they have been duped into believing its good for the community… until they become a victim and nothing is done. But hey, we have some relationship repairs we need to focus on, right? 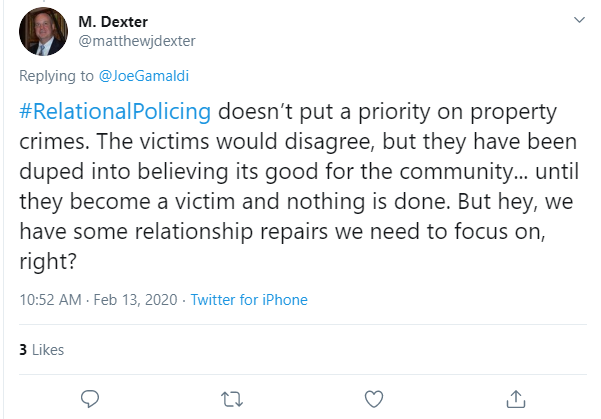 In the following video by Houston ABC affiliate KTRK, a report explains how certain violent criminals have gamed the liberal judges by not paying for their ankle monitors.

Not only did she refuse to fire 1 of her top appointed Lts from the outset, but gave him a promotion first(DA Office insiders described it as such). Only after mounting national pressure did she do the right and just thing. She has no business being the DA https://t.co/D5npqjMkNT 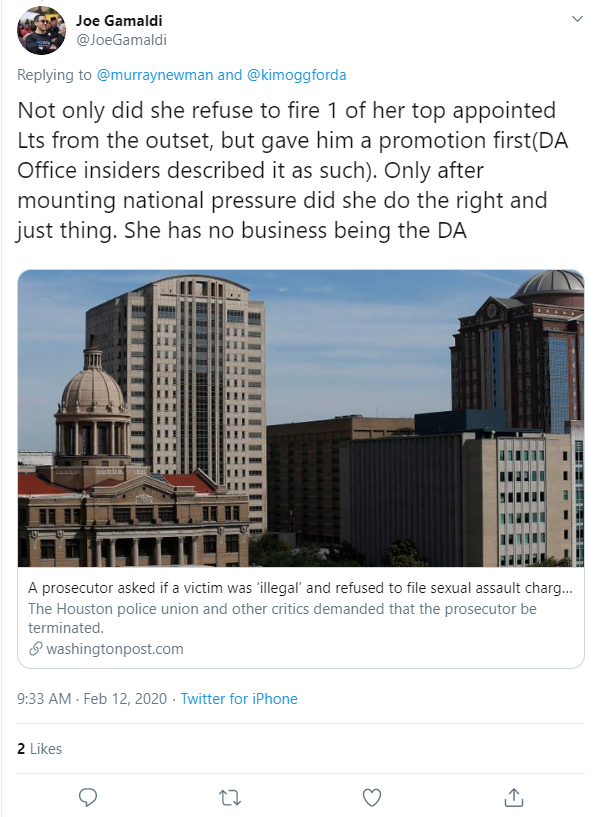 What alternatives do we have to Kim Ogg? The Houston Police Officers’ Union endorses both Democrat and Republican challengers to Ogg. However, as for myself, I will only include the endorsement of the Republican challenger. From my research, the Democrat challenger to Ogg promises to be worse than Ogg has been.

One thought on “Seven stories on the problem with electing Democrats”