The Political Insider writes in a 19 October 2018 article how Texas Democrats have registered non-citizens to vote.

Texas Democrats have been accused of asking non-citizens to register and vote according to complaints filed with state and federal officials, even going so far as to send out applications with the citizenship box pre-marked ‘Yes.’

District attorneys and the Justice Department were notified about the applications by the Public Interest Legal Foundation. The group also forwarded a signed affidavit from one individual who said a number of people, who are non-citizens, received the mailing.

Logan Churchwell, a spokesman for the group dedicated to securing the integrity of elections, told the Washington Times, “This is how the Texas Democratic Party is inviting foreign influence in an election in a federal election cycle.”

The mailings, which feature a return address for the State Democratic Executive Committee and a “paid for by the Texas Democratic Party,” were distributed around the Rio Grande Valley region of south Texas.

Swift move, Texas Democrats. By mailing these pre-filled voter registration forms, you provided talk show fodder for multiple conservative radio hosts, blog posting material for all of us bloggers, and a reason for Republicans to vote.

In an 18 October 2018 Fort Worth Star-Telegram article, a scheme that four women had to harvest ballots for their favorite candidates.

State authorities now allege Sanchez, also known as Leticia Sanchez Pierce, was among four women being paid to target elderly voters in north Fort Worth in a scheme to harvest their ballots for specific 2016 candidates.

Sanchez, a teacher assistant at Como Elementary, is on leave but still employed by the Fort Worth school district, according to Clint Bond, a spokesman for the district.

Sanchez, 57, was indicted last week on 17 counts in connection with the alleged voter fraud operation. Among the accusations were that she marked Garcia’s ballot without his consent and provided false information on applications for mail-in ballots for Garcia and Barela.

(Read more at the Fort Worth Star-Telegram)

Considering the times that Democrats have lectured via Twitter regarding the President’s moral failings, will they admit the moral depravity of stealing elderly citizens’ ballots in order to fraudulently cast votes?

On Saturday, California Governor Jerry Brown signed Assembly Bill 1461, the New Motor Voter Act, which will automatically register people to vote through the DMV, and could result in illegal aliens voting.

Any person who renewed or secured a driver’s license through the DMV may now register to vote, or choose to opt out of doing so. Because illegal immigrants are now eligible for obtaining driver’s licenses, they could be allowed to vote in elections if the Secretary of State’s office fails to verify their eligibility properly.

Although this and the following story do not specifically cover intentional acts of voter fraud, they do open up the possibility of non-citizens illegally voting in a federal election (since it is against federal law for a non-citizen to vote in a federal election). This also opens up the possibility of having swaths of the election results being thrown out due to widespread improprieties. 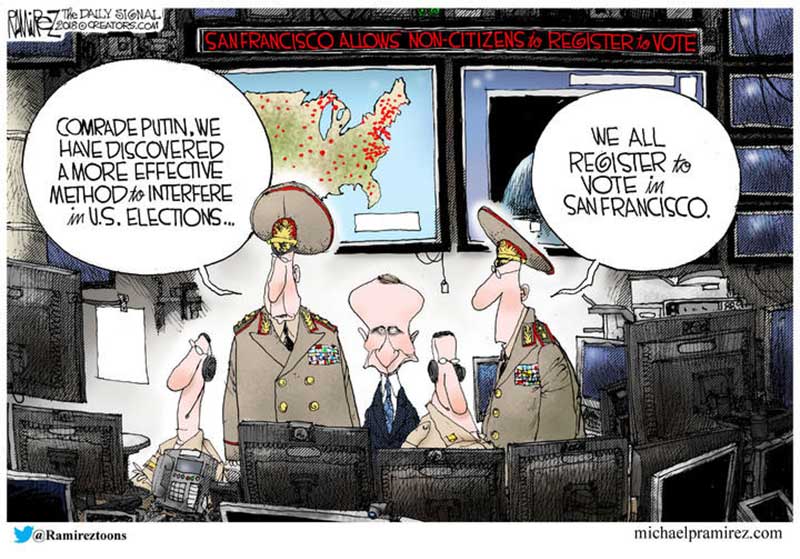 The Department of Elections in San Francisco on Monday issued voter registration for illegal aliens to allow them to vote for members of the city’s Board of Education in the Nov. 6 election.

Becoming California’s first city to allow non-American citizens to vote in local elections, Supervisor Norman Yee said, “We want to give immigrants the right to vote.”

[For the record, “immigrants” are people who come to America through the legal process, while “illegal aliens” sneak into the country.]

In order to vote, the illegal aliens must live in the city, be at least 18 years old and be the “parents, legal guardians or caregivers of children under the age of 19 who also reside in San Francisco,” ABC-7 reported.

(Read more at the Daily Wire)

In light of the fact that California allows illegal aliens to vote, should the House and Senate refuse to seat members from California? There will be no way to tell whether those elected were elected by American citizens.

https://platform.twitter.com/widgets.js
In the tweeted video above, the staff of Senator Claire McCaskill admits that Planned Parenthood doesn’t directly “donate to Claire because they don’t want to ostracize pro-life Democrats in Missouri,” but still receives their “donations through separate means.” Also, Claire most definitely supports the pro-abortion platform of Planned Parenthood. 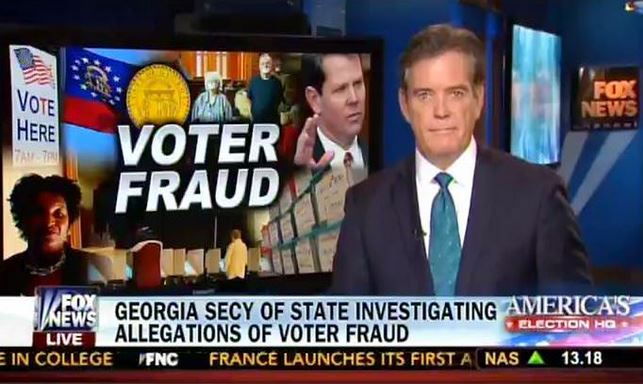 Voter fraud in Georgia: Two groups tied to Democrats are under investigation for forged voter applications

A 10 September 2018 post at United Liberty reveals that two Democrat-connected groups have come under investigation.

There’s some big news is coming out of the Peach State that implicates organizations tied to state House Minority Leader Stacey Abrams (D-Atlanta), a supporter of Michelle Nunn and Jason Carter, the Democratic Party of Georgia’s nominees for U.S. Senate and Governor.

Third Sector Development, founded by Abrams, and its subsidiary, the New Georgia Project, have allegedly forged voter registration applications, forged signatures, and told voters that they have to re-register. The two organizations focus their efforts on minority engagement. According to WSB-TV, the Georgia Secretary of State’s office subpoenaed records from the two investigations after receiving numerous complaints:

In a memo sent to county elections officials, Secretary of State Brian Kemp said in recent weeks his office has “received numerous complaints about voter applications submitted by the New Georgia Project.”

“We’re just not going to put up with fraud. I mean, we have zero tolerance for that in Georgia so we’ve opened an investigation and served some subpoenas,” Kemp told Channel 2 political reporter Lori Geary. “At the end of the day this is not going to be about politics. This is about potential fraud which we think happened.”

This has to end. There needs to be a point where illegal votes do not detract from our legal votes. If a party cannot convince the voters to support it with votes, it must not be allowed to cheat its way back into the pocketbook of America.

670 ballots in a precinct with 276 voters, and other tales from Georgia’s primary

in a 12 August 2018 article by McClatchy, we find about the fraud that occurred during the 2018 primaries.

Habersham County’s Mud Creek precinct in northeastern Georgia had 276 registered voters ahead of the state’s primary elections in May.

But 670 ballots were cast, according to the Georgia secretary of state’s office, indicating a 243 percent turnout.

The discrepancy, included in a number of sworn statements and exhibits filed as part of a federal lawsuit against the state by election security activists, comes amid swelling public concern for the security of Georgia’s voting systems. Georgia is one of four states that uses voting machines statewide that produce no paper record for voters to verify, making them difficult to audit, experts say.

And cybersecurity experts have warned that there were security flaws on the state election website leading up to the 2016 contest that permitted the download and manipulation of voter information.

The court filings highlight various issues with Georgia’s 16-year-old voting machines, as well as the system that runs them and handles voter registration information.

In one sworn statement, a voter explains that she and her husband, who were registered to vote at the same address, were assigned different polling places and different city council districts. In another, a voting machine froze on Election Day.

In several instances, voters showed up at their polling places as listed on the secretary of state’s website, only to be told they were supposed to vote elsewhere.

Some issues, such as the freezing machines, could be chalked up to the age of the polling infrastructure, said Harri Hursti, a computer programmer who studies election cybersecurity.